1976-Present
Michael Dorn is an American actor and voice artist. He is best known for his role as the Klingon Worf from the Star Trek franchise. He voiced I.M. Weasel from Cartoon Network's I Am Weasel and Thomas from Cartoon Network's Regular Show He also played Fright Knight In Nickelodeon's Danny Phantom.

For Disney, he voiced Coldstone, Taurus, and his father on the animated series Gargoyles, Brisbane in Aladdin, the Minotaur in Hercules, and played the Sandman in the 2002 romantic comedy-holiday film The Santa Clause 2 and its sequel.

He also voiced Rufus 3000 in the 2003 Disney made-for-TV film Kim Possible: A Sitch in Time, Bupu in The Lion Guard, the Elders and Solomon the Great in several episodes of Dinosaurs. He also played Dr. Carter Burke in the ABC TV show, Castle.

Bupu
(The Lion Guard)
Add a photo to this gallery 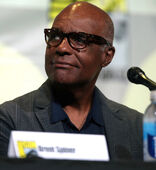 Michael Dorn attending the 2016 San Diego Comic Con.
Add a photo to this gallery
Retrieved from "https://disney.fandom.com/wiki/Michael_Dorn?oldid=4316477"
Community content is available under CC-BY-SA unless otherwise noted.