Cameron (with Luker)
Dylan and Carys (with Zeta-Jones)

Michael Kirk Douglas is an American actor and producer, primarily in movies and television. For Disney, he played Danny in the 1972 Disney film, Napoleon and Samantha. He also voiced Waylon in Phineas and Ferb. Additionally, he portrayed Hank Pym in the 2015 Marvel Cinematic Universe film, Ant-Man, and reprised his role in the 2018 film, Ant-Man and the Wasp, the 2019 film, Avengers: Endgame, What If...?, and Ant-Man and the Wasp: Quantumania.

Douglas was born in New Brunswick, New Jersey, the first child of actors Kirk Douglas and Diana Dill. He attended The Allen-Stevenson School in New York City, Eaglebrook School in Deerfield, Massachusetts, and The Choate Preparatory School (now Choate Rosemary Hall) in Wallingford, Connecticut. He received his B.A. in drama from the University of California, Santa Barbara in 1968, where he was also the Honorary President of the UCSB Alumni Association. He studied acting with Wynn Handman at The American Place Theatre in New York City.

Douglas first achieved prominence for his performance in the ABC police procedural television series The Streets of San Francisco. This success soon landed him production credits and film roles, like The China Syndrome, Romancing the Stone, The Jewel of the Nile, A Chorus Line, Fatal Attraction, Wall Street, Wall Street: Money Never Sleeps, Black Rain, The War of the Roses, Basic Instinct, Falling Down, The American President, The Game, Traffic, Wonder Boys, It Runs in the Family, and Solitary Man.

In 2013, his portrayal of Liberace in the HBO film, Behind the Candelabra won him the Primetime Emmy Award for Outstanding Lead Actor in a Miniseries or a Movie. 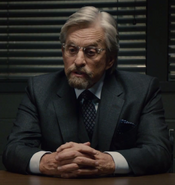 Michael Douglas at the premiere of Ant-Man in June 2015.

Michael Douglas at his Hollywood Walk of Fame ceremony in November 2018.

Michael Douglas posing in the pressroom during the 76th annual Golden Globes in January 2019.