1995-present
Michael Giacchino is an American composer and director. He is best known for composing the musical scores for many Disney projects, including The Incredibles, The Muppets' Wizard of Oz, Sky High, Ratatouille, Up, Cars 2, John Carter, Tomorrowland, Inside Out, Star Wars: The Force Awakens, Zootopia, Rogue One, Coco, and Incredibles 2. He has also composed the musical scores for many Marvel movies including Doctor Strange, Spider-Man: Homecoming, Spider-Man: Far From Home, Spider-Man: No Way Home, and Thor: Love and Thunder, as well as the Disney+ series Secret Invasion. He has received multiple Grammy awards, an Emmy, Golden Globe Award, and Academy Award. He is also known for collaborating with directors Brad Bird, J.J. Abrams, Pete Docter, Colin Trevorrow, Drew Goddard, and Matt Reeves. He also directed the 2022 Marvel Cinematic Universe special Werewolf by Night.

Outside Disney, Michael Giacchino is known for composing for the first Medal of Honor and Call of Duty video games, as well as the Jurassic World and the rebooted Star Trek trilogies, Mission: Impossible III, Mission: Impossible - Ghost Protocol, Cloverfield (albeit one composition), Super 8, Speed Racer, Let Me In, Dawn of the Planet of the Apes, and War for the Planet of the Apes, Jupiter Ascending, The Book of Henry, Bad Times at the El Royale, Jojo Rabbit, An American Pickle, Extinct, Let Him Go, and The Batman. He also provided scores for the TV shows Alias, Lost, and Fringe (all created by J.J. Abrams).

Michael Giacchino at the 82nd annual Academy Awards in March 2010.

Michael Giacchino at the premiere of John Carter in February 2012.

Michael Giacchino at the premiere of Zootopia in February 2016. 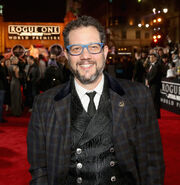 Michael Giacchino at the premiere of Rogue One: A Star Wars Story in December 2016. 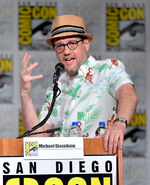