Not to be confused with the English actor, Michael Gough.

1986-present
Michael J. Gough is an American voice actor, singer, and musician, who is best known for voicing Osmund Saddler in Resident Evil 4, Deckard Cain in the Diablo series, Shrek in the Shrek video game franchise, and the Scarecrow in Tom and Jerry: The Wizard of Oz and its sequel, Tom and Jerry: Back to Oz.

Gough has provided the voices for many different Disney roles, most notably as Gopher in the Winnie the Pooh franchise. 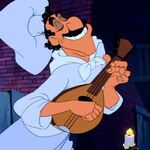 Samir the "Destroyer"
(Aladdin: The Series)