Michael Lerner is an American film actor and voice actor. He was nominated for the Academy Award for Best Supporting Actor for his role in Barton Fink (1991).

Lerner has appeared in Disney films, such as Edward Biderman in Blank Check, Mr. Channing in My Favorite Martian, Weasel in Newsies, and provides a voice role as the Producer in 101 Dalmatians II: Patch's London Adventure. 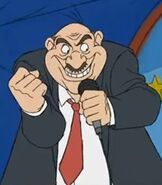 The Producer
(101 Dalmatians II: Patch's London Adventure)
Add a photo to this gallery
Retrieved from "https://disney.fandom.com/wiki/Michael_Lerner?oldid=4110648"
Community content is available under CC-BY-SA unless otherwise noted.