2 (1 deceased)
Michael John McKean is an American actor, voice actor, comedian, writer, composer, and musician well known for his portrayal of Squiggy's friend, Leonard "Lenny" Kosnowski, on the sitcom Laverne & Shirley and his role as Chuck McGill on AMC’s Better Call Saul; and for his work in the Christopher Guest ensemble films, particularly as David St. Hubbins, the lead vocalist and rhythm guitarist of the fictional rock band Spinal Tap from the film, This Is Spinal Tap. 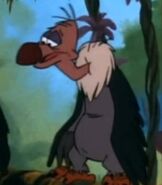 Cecil
(Jungle Cubs)
Add a photo to this gallery

Michael McKean speaks at the Breeders panel at the 2020 Winter TCA Tour.
Add a photo to this gallery
Retrieved from "https://disney.fandom.com/wiki/Michael_McKean?oldid=3898054"
Community content is available under CC-BY-SA unless otherwise noted.