1994-present
Michael Anthony Peña is an American actor and musician. He is well known for his roles in several films such as Paco Hernandez in 2013's American Hustle, Detective Navidad Ramirez in the 2013 drama Gangster Squad, Frank "Ponch" Poncherello in the 2017 cop comedy CHiPs. He also voiced Kai in the 2017 Warner Animation Group Film The Lego Ninjago Movie. 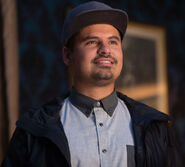 Red
(A Wrinkle in Time)
Add a photo to this gallery

Michael Pena at premiere of Ant-Man in June 2015.

Michael Pena visiting Jimmy Kimmel Live in March 2017.
Add a photo to this gallery
Retrieved from "https://disney.fandom.com/wiki/Michael_Pe%C3%B1a?oldid=3981264"
Community content is available under CC-BY-SA unless otherwise noted.