2
Michael Anthony Richards is an American actor, voice actor, writer, television producer, and retired comedian widely known for his portrayal of Cosmo Kramer on the television sitcom Seinfeld. During the show's run, he received the Primetime Emmy Award for Outstanding Supporting Actor in a Comedy Series three times.

His Disney roles include the Wolf in Redux Riding Hood, the Director in the Dinosaurs episode "WESAYSO Knows Best", and himself in the 1994 TV documentary special, The Wonderful World of Disney: 40 Years of Television Magic. 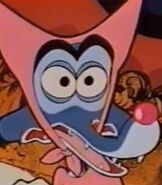 The Wolf
(Redux Riding Hood)
Add a photo to this gallery

Retrieved from "https://disney.fandom.com/wiki/Michael_Richards?oldid=4159823"
Community content is available under CC-BY-SA unless otherwise noted.