"Too late! You guys are losers!"
"A great concept of truth is fading out in the world."

“I don't have much luck when it comes to getting close to people. So I lied. I wasn't just watching you 'cuz I thought you were Spider-Man”
―Michelle confessing her feelings to Peter Parker[src]

Michelle Jones (better known as MJ) is a character from Spider-Man: Homecoming and is the deuteragonist of the sequel, Spider-Man: Far From Home, as well as Peter's new girlfriend.

Director Jon Watts revealed in an interview that the primary inspirations for Michelle Jones were Allison Reynolds from The Breakfast Club and Lindsay Weir from Freaks and Geeks.[1]

In regards to Michelle Jones' backstory, Chris McKenna and Erik Sommers originally wrote a scene for Spider-Man: Homecoming which heavily implied that Michelle comes from a bad home, with no one to pick up her after classes or meet her at the bus after returning from Washington, D.C., leading Peter Parker and Aunt May to offer her a ride home. Although McKenna and Sommers did not know if the scene was filmed or not, they think that this backstory is alluded by the many things MJ says in Spider-Man: Far From Home.[2]

Michelle Jones is a student at the Midtown School of Science and Technology. She is a classmate of Peter Parker, and is a member of the school's Academic Decathlon team.

Jones called Parker and Ned Leeds losers for staring at Liz Allan for too long. When Leeds asked why she sat at their table, she replied that she didn't have any friends, and returned to reading her book.

Jones read the book Of Human Bondage throughout the entirety of gym class, even while she was supposed to be doing curl-ups.

A member of the Academic Decathlon team, Liz Toomes, threw a party at her house. Jones attended, but when Parker and Ned Leeds arrived, she called them losers for attending. When Leeds pointed out that she was attending the party as well, she gave them a quirky look and said, "am I?"

Jones joined the Academic Decathlon team for the field trip to Washington, D.C. to participate in the finals. She questioned Mr. Harrington on the timetable for the trip because she wanted to get in some light protesting while in the nation's capital. She correctly answered the last question of the Decathlon, winning the competition for the team. On the way to Washington, Parker and Leeds noticed increased activity around the damaged Triskelion structure, with Jones explaining that Damage Control was still cleaning up the mess after Captain America caused the Helicarriers to crash for seemingly no reason. While Leeds states that he did it to save them, Jones rebuffs him and declares that this is what they want the public to think.

After the Decathlon, Mr. Harrington took them to the Washington Monument. Jones refused to go up to the top, not wanting to visit a building that had been built by slaves. While she waited at the bottom, an explosion at the top trapped her teammates in the monument's elevator. When Spider-Man arrived, Jones informed him that her friends were in the elevator. Spider-Man successfully saved the trapped Academic Decathlon team.

Jones sat next to Parker when he was issued a detention for attempting to skip class. After Parker left, Coach Wilson asked Jones why she was there, as she did not have detention. Jones answered that she enjoyed sketching people in crisis, and showed him a drawing she'd made of him.

Following the revelation that Liz Toomes' father was the Vulture, she was forced to move to Oregon with her mother. In the wake of her leaving, Jones was made the captain of the team. She told her teammates that her friends called her "MJ". When Peter received a message and had to leave, Jones looked at him with suspicion and asked what was he up to. She then laughed and told him she was kidding and that she did not care. Shortly after that, she was being interviewed by Betty Brant, an anchor on the school's news team, as to who she thought Spider-Man might truly be. Jones replied that she wasn't sure but that she had her suspicions.

While she does not appear in this film, she is revealed to have been among the half of the universe that was disintegrated by Thanos offscreen.

While she also does not appear in this film, she is resurrected offscreen by the Hulk.

In Far From Home, MJ has shown to have grown closer with Peter and Ned, along with Betty, showing character development and has tried to make friends. During the 2023-2024 school year, MJ developed romantic feelings for Peter and vice versa. She plans on exploring the counties along with her friends, whilst Peter tries to tell MJ her how he feels. MJ is the center of Peter's affection as well as his romantic rival Brad Davis, but MJ shows no interest in Brad.

After the battle in London, Michelle finds an injured Peter on the bridge where she embraces him. The teens check on each other's safety and she tells him she brought a weapon to help him fight Mysterio. MJ shows Peter the Black Dahlia necklace that Happy gave her (on Peter's behalf) and he expresses that he wanted to win her over with his plan. Touched, Michelle kisses Peter and tells him that she struggles to get close to people which is why she lied about only watching him because of his alter ego. Peter apologises to MJ for the necklace being broken and she assures him she likes it better broken. Michelle and Peter express their feelings for each other with their first kiss and they return to New York as a couple.

When they return home, Peter takes MJ on a swing around New York for their first date. Although MJ is looking forward to it at first, her mind changes during the swing where she is seen screaming her way around the city and soon asks Peter to put her down.

After their swing, MJ tells Peter she never wants to do it again as it scared her too much. The couple end their date with Peter waving to the people of New York, but things get out of hand when Michelle and Peter watch the breaking news on the Bugle news. Michelle and Peter watch on and she is left horrified to learn that her boyfriend has been framed for the attacks Mysterio caused back in London, a week prior.

Michelle will return in Spider-Man 3 and be continuing her relationship with Peter Parker. Rumors point that MJ will be joining Peter while he is on the run - they will be on the run together.[3] According to behind the scenes images, MJ will be working in a bakery during the Christmas season.[4]

The Disney Wiki has an article focusing on the relationships of Michelle Jones.

Zendaya as Michelle behind the scenes

Michelle asking Peter where is he going

Michelle showing Peter a sad drawing of him in detention 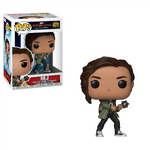 Retrieved from "https://disney.fandom.com/wiki/Michelle_Jones?oldid=4395537"
Community content is available under CC-BY-SA unless otherwise noted.