Claudia Rose Kelley
John Henry Kelley
Michelle Marie Pfeiffer is an American actress, who is best known for her roles in the films: Grease 2, Scarface, Ladyhawke, The Witches of Eastwick, Married to the Mob, Dangerous Liaisons, The Fabulous Baker Boys, Batman Returns, Love Field, The Age of Innocence, Wolf, Dangerous Minds, What Lies Beneath, I Am Sam, Hairspray, and Dark Shadows. She received Academy Award nominations for Best Supporting Actress in Dangerous Liaisons, and for Best Actress in The Fabulous Baker Boys and Love Field. She also voiced Tziporrah in DreamWorks' The Prince of Egypt and Eris the Goddess of Chaos in Sinbad: Legend of the Seven Seas.

For Disney, she played Lillian Harper in the 2012 drama People Like Us. She also made a guest appearance in the first episode of Muppets Tonight. In addition, she played Louanne Johnson in Dangerous Minds, Sally "Tally" Atwater in Up Close & Personal, Rose Cook Lewis in A Thousand Acres, Janet van Dyne in Ant-Man and the Wasp, Avengers: Endgame, and Ant-Man and the Wasp: Quantumania, and Queen Ingrith in Maleficent: Mistress of Evil. 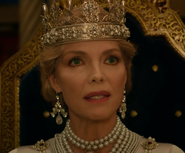 Queen Ingrith
(Maleficent: Mistress of Evil)
Add a photo to this gallery

Michelle Pfeiffer attending the world premiere of Maleficent: Mistress of Evil in September 2019

Retrieved from "https://disney.fandom.com/wiki/Michelle_Pfeiffer?oldid=4515719"
Community content is available under CC-BY-SA unless otherwise noted.