Mick is Bash Johnson's best friend. He is a football player on Norrisville High Football Team. He was part of Bash's band (Bash & the Bros) in the episode "So U Think U Can Stank". He also appeared in "The Tale of the Golden Doctor's Note" and bit a volleyball twice, which was an issue that bothered Bash. He also appeared in "Secret Stache" as a bouncer for the Mustache Society's secret club party. 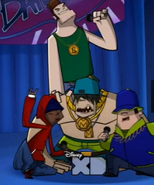 Retrieved from "https://disney.fandom.com/wiki/Mick?oldid=4201482"
Community content is available under CC-BY-SA unless otherwise noted.