The Clubhouse has lost all of its colors and has turned black and white! Mickey and his friends have to collect items in the six colors of the rainbow to refill the Clubhouse's Rainbow Color Machine that Professor Von Drake owns. 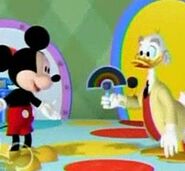 Retrieved from "https://disney.fandom.com/wiki/Mickey%27s_Color_Adventure?oldid=3856196"
Community content is available under CC-BY-SA unless otherwise noted.