The Clubhouse's Handy Helpers are not working properly, so the Mickey Mouse Clubhouse friends try to figure out what has happened to them. They also enlist Professor Von Drake for help. Ultimately, it turns out that Pluto's squeaky ball was stuck in the handy dandy machine. When they get it out, the Handy Helpers start working again and are now able to make dinner. 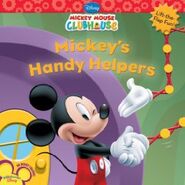 The book adaptation of the episode.