Mickey's Magical Christmas: Snowed in at the House of Mouse
Mickey's House of Villains is a direct-to-video film, based on House of Mouse, starring Mickey Mouse, Donald Duck, Minnie Mouse, Goofy, Daisy Duck, and characters and villains from past Disney movies. It was released on both VHS and DVD by Walt Disney Home Entertainment on September 3, 2002. As the events of the film take place during the third and final season of House of Mouse, it should not be confused with the episode, "Pete's House of Villains", in which Mickey lets Pete run the show.

It is Halloween night at the House of Mouse, and a lot of villains are showing up. Jafar has a trick in store for the usual heroes of the House, but the villains have to wait until midnight for him to unleash it. After a series of cartoons, Jafar, along with his new henchmen Captain Hook, Cruella De Vil, Ursula, and Hades, takes over the house with a musical number entitled "It's Our House Now!". All the other villains soon join Jafar's plan. The heroes, princesses and other Disney characters are trapped in the kitchen while Mickey and several others are thrown out into the street. They witness the House's name being changed to the House of Villains.

Mickey, Donald, Goofy and Minnie try to take their House back, but Chernabog stops them from entering the building. After another two cartoons, Mickey dresses in his sorcerer outfit from Fantasia (and Fantasia 2000) and challenges Jafar to a magical duel using fireballs. Just when Mickey's sorcerer hat is knocked off, Aladdin escapes from the kitchen, flying on the Magic Carpet and gives Daisy Duck the magical lamp. Daisy hands it to Mickey who uses the lamp to suck Jafar into it. The rest of the villains run away and the House of Mouse is once again restored.

Like the show, the film shows several Disney cartoons. In fact, these shorts make up more of the movie than the actual plot with the villains. However, all their title cards are edited out. Among them, three of the shorts are classic ones:

The other five shorts were all originally broadcast on Mickey Mouse Works in 1999.

"Oooo, it's a Houseketeer Halloween! So grab your garlic and get set for America's most haunted. He's Count Mickey Mouse." 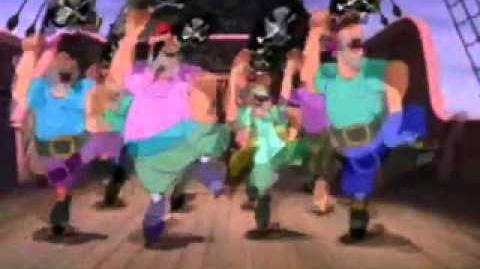 The Disney Wiki has a collection of images and media related to Mickey's House of Villains.