October 1949-March 1950
Mickey's Inferno is an Italian comic story parodying Dante's Inferno, featuring Mickey as Dante and Goofy as Virgil and an array of Disney characters. It was originally published in six parts in Topolino #7-12, spanning from October 1949 to March of 1950.

It did not receive an English translation until 2006 when an abridged version was printed in Walt Disney's Comics and Stories #666. A complete version was released in 2016 by Papercutz as the first of a "Great Parodies" series.

After starring in a stage play of Dante's Inferno, Mickey and Goofy are put under a hypnotic spell by a mesmerizer hired by Pete to believe that they are their characters. They soon find themselves on a journey through the actual Inferno, tracing Dante's journey through the seven circles of hell, now populated by a variety of classic Disney characters. The deeper Mickey and Goofy go, the more they begin to remember their true selves.

In the icy center of the Inferno, the trio finally encounter Dante himself, who has become fed up with the nonsense of this parody of his work, tying up the comic's creators to punish them for what he sees as treachery. Mickey argues that all the authors did was help re-introduce his masterwork to a new audience, which convinces him to let all of them go. 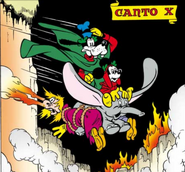 Dumbo giving Mickey and Goofy a ride through Hell. 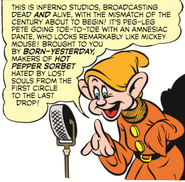 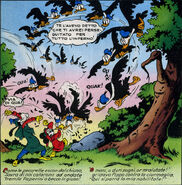