Disney Wiki
Register
Don't have an account?
Sign In
Advertisement
in: Restaurants, Extinct Attractions, Disney parks and attractions,
and 3 more

Mickey's Kitchen is a defunct restaurant chain that operated experimentally from 1990 to 1992.

Designed to accompany the Disney Store and drive more traffic towards it, two test locations existed at the Montclair Plaza outside Los Angeles, California and at the Woodfield Mall outside of Chicago, Illinois. Like many of the Disney Stores at the time, character vignettes were placed throughout the restaurant space featuring characters from Winnie the Pooh, Alice in Wonderland, and Lady and the Tramp.

In the end, Mickey's Kitchen was unable to compete with more established mall food court restaurant chains and the concept was shuttered in 1992. 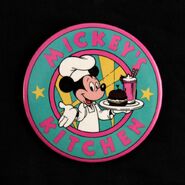