Mickey's Magical Christmas: Snowed in at the House of Mouse

Mickey's Magical Christmas: Snowed in at the House of Mouse

Mickey's Magical Christmas: Snowed in at the House of Mouse is a direct-to-video movie spin-off from the animated television series, House of Mouse. The events of the film take place during the second season of House of Mouse.

Mickey Mouse has just finished up another successful night at the House of Mouse on Christmas Eve and is wishing the guests a safe journey home. However, Goofy points out that a huge snowstorm has trapped them in the House. Mickey decides to have a free-of-charge Christmas party for the guests. Donald Duck, on the other hand, is being awfully miserly for a reason (not unlike his Uncle Scrooge) that is never given and would prefer not to take part in the festivities. However, Daisy, Mickey, Minnie, and Goofy get him to enjoy a cup of hot cocoa on stage next a fireplace set and comfy armchair. Minnie then finds some Christmas cartoons they haven't shown today and they decide to play them.

After the first cartoon, "Donald on Ice", Ludwig Von Drake presents "the science of Santa" to explain some of the impossibilities of his traveling over the world in one night (using the speed to have a future version of himself steal a cookie jar from his mother, who is surprisingly at the club as well). Donald is still not in the Christmas mood, so Mickey shows clips of him asking the audience members what they wished to have for Christmas. Seeing that Donald is still not willing to change his mood, Mickey shows two more cartoons, Pluto's Christmas Tree and "The Nutcracker", plus excerpts of Mickey decorating his house from "Mickey's Christmas Chaos". Unfortunately, even after seeing that, Donald still refuses to change his mood (likely sour at the idea of being a mouse king and losing in the "Nutcracker" story), earning frowns and glares from everyone in the audience (except for Grumpy, who actually smiles at this).

Mickey then reluctantly gives up. He and his friends have done everything that he can think of. He then thinks that Donald will never get in to the Christmas spirit. Mickey heads to the roof of the building, where he talks to Jiminy Cricket about how he tried so hard to make Donald feel the Christmas spirit. Jiminy then tells him that the spirit of Christmas doesn't come from a party, it's about being together with the people you love and care about. Mickey agrees on his advice that Donald is his best friend and he's part of his family. Jiminy reminds him to make a wish upon a star. Doing so, Mickey wishes that home or away with family and friends whenever they have the best yet decorations even a humblest little tree that everyone would have the Christmas spirit. He then receives a star from the sky and returns to the stage, offering Donald the opportunity to put it on the tree as it lacks one. This simple act fills Donald with joy as he places the star on the tree. The star then starts working its magic on the House, turning all the wreaths they have around the club gold and adding more golden wreaths throughout (even giving the Magic Mirror Spirit in the lobby a hat). They show their last cartoon for the night, Mickey's Christmas Carol, and afterward, everyone, even the villains, gathers on the stage to sing the closing song, "The Best Christmas of All". Mickey then tells the viewers "Merry Christmas" and Tinker Bell ends the film.

Like the show, the film shows several Disney cartoons. In fact, these shorts make up more of the movie than the actual plot. However, all their title cards are edited out.

"The Best Christmas of All" 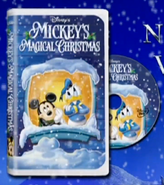 An early concept of the movie's cover.