It was originally scheduled to open on April 15, 2020[1], but it was delayed until April 1, 2021, since the opening was postponed indefinitely following the closure of the park due to the coronavirus pandemic. Open rehearsals for the show began on March 31, 2021.

Mickey and his Pals are delighted with the surprising development and are excited to hear the next song. But when the last door opens, no one appears and no music is heard. Worried, Mickey and his Pals set off on a journey to find the missing song.

Along the way they encounter characters from many Disney films. Mad Hatter, Mary Poppins with Lumiere welcomes them with a colorful banquet. Baloo and King Louie together with Timon put on a powerful jungle-style performance. In a lovely world of starry skies and mirrors, the Disney Princesses dance a graceful waltz. And then Ursula and Captain Hook appear in a thrilling scene. Will the journey of Mickey and his Pals lead them to the lost song?

Guests of all ages will enjoy this dynamic entertainment offering with many of their favourite Disney Characters, unforgettable music, and spectacular scenes featuring a blend of the stage. 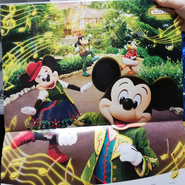 Photo of the theatre