Mickey's Man Friday is an unproduced animated short that was to have been a remake of the 1935 cartoon of the same name.

In 1941, after the Disney studio created a Technicolor remake of the 1934 short Orphan's Benefit, plans were made to remake other black-and-white shorts with updated character models. Mickey's Man Friday was the next short to be remade, but for unknown reasons, either due to the Disney animators' strike that year or the outbreak of World War II, plans for this and other remakes were scrapped. Model sheets and animation drawings for the planned remake of Mickey's Man Friday survive.

Apparently, instead of his buttoned shorts, Mickey was to have worn a sailor's outfit in the first half, followed by a Crusoe-esque outfit in the second half. 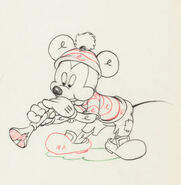 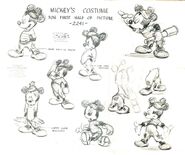 Add a photo to this gallery
Retrieved from "https://disney.fandom.com/wiki/Mickey%27s_Man_Friday_(1941)?oldid=1796974"
Community content is available under CC-BY-SA unless otherwise noted.