May 2, 2009
Mickey's Message from Mars" is an episode from the second season of Mickey Mouse Clubhouse, which originally aired on Playhouse Disney on May 2, 2009.

Mickey, Goofy, Daisy, and Pluto fly up to Mars and help a Martian Mickey find a secret treasure. First, Professor Von Drake discovers a creature who is equivalent to Mickey is flashing a color pattern (Blue, blue, yellow, green) which means "PLEASE, PLEASE, COME, HELP!" which Mickey needs to help Martian Mickey on his mission. Then, the clubhouse turns into a NASA-like mission control center which workers view the astronauts on a flat screen. The countdown starts in a singing version and the rocket lifts off. Then they land and find the same pattern behind the mountains and Martian Mickey tells Mickey that he buried the treasure in one of the 3 craters. Then, the Martian Twilight Festival begins by doing the "Yum Blatz" dance. Then the friends say goodbye to Martian Mickey and return to the clubhouse and have hotdogs. 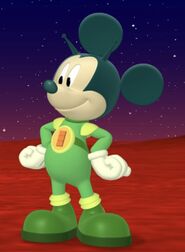