Start a Wiki
Mickey's Mouseorail was a promotional vehicle that traveled around the United States promoting Disneyland's 35th Anniversary in 1990. The Mouseorail was actually the front car of the 1969 Mark III Monorail Red, the last of the Mark IIIs to operate on the Disneyland Monorail System before being replaced by the Mark V Monorails. It was converted into a road vehicle and was featured in the 1990 Tournament of Roses Parade before making a trip around the country and finally ending its tour at Disneyland on July 17, 1990.

The Mouseorail's automotive parts were later removed, and the entire vehicle was painted blue and orange to resemble a blueprint, and was placed in the queue for Rocket Rods in 1998. Rocket Rods' queue was largely a tribute to transportation history and the Imagineering history of Tomorrowland attractions. The front car of the Mark III also sat alongside similarly-repainted Rocket Jets and PeopleMover vehicles and giant Imagineering vehicle blueprints featuring numerous Tomorrowland attractions such as Space Mountain and Flying Saucers. 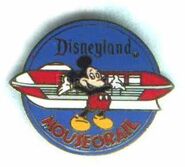 Add a photo to this gallery
Retrieved from "https://disney.fandom.com/wiki/Mickey%27s_Mouseorail?oldid=257638"
Community content is available under CC-BY-SA unless otherwise noted.