That evening, Goofy and Max go next door to the Andersons, a less fortunate family, to give them a Christmas dinner. Goofy then dresses up as Santa Claus to impress the kids, but one of the family's kids pulls off his hat and exposes him. This upsets Max, making him think that his dad was lying to him about Santa, and he runs home in tears.

As the movie comes to a close, we see Mickey, Minnie, Pluto, Goofy, Max, Donald, Daisy, Huey, Dewey and Louie joining each other in the streets outside, singing a medley consisting of "Jingle Bells", "Deck the Halls", and "We Wish You a Merry Christmas", and wishing the audience happy holidays. 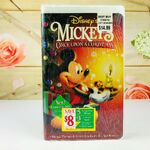 Retrieved from "https://disney.fandom.com/wiki/Mickey%27s_Once_Upon_a_Christmas?oldid=4255334"
Community content is available under CC-BY-SA unless otherwise noted.