October 10, 2014
"Mickey's Pirate Adventure" is the thirteenth episode of the fourth season of Mickey Mouse Clubhouse. It aired on Disney Junior on October 10, 2014.

Ahoy, Matey! Put on your pirate hat and set sail for some swashbuckling voyages in this collection of Mickey Mouse Clubhouse episodes. Captain Mickey and his crew of Clubhouse mateys set out on their pirate ship, the Jolly Golly, to help Captain Goof-Beard save Harmony-Chord Island. And go on more adventures with the crew when they begin a treasure hunt and help their outer space friend solve a puzzle. Yo ho ho, and a do-re-mi!

In the special, Mickey and pals are enjoying a day at the beach, when Peg Leg Pete delivers a note from Goofy’s long-lost Grandpappy, Captain Goof-Beard (voice of Dick Van Dyke), asking for the gang’s help in ensuring that Harmony-Chord Island, the musical isle where Goof-Beard lives, doesn’t go completely out of tune and sink. 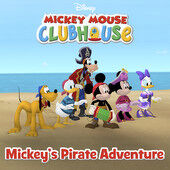 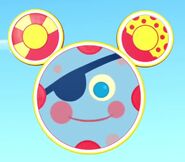