Mickey's Polo Team was released in 1936.

The Mickey Mousers take on the Movie Stars in a manic polo tournament.

Notice that Goofy is referred to in this short as "The Goof".

Donald and his donkey bumping into Harpo and his ostrich. 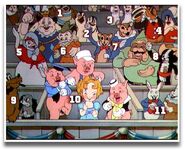 Retrieved from "https://disney.fandom.com/wiki/Mickey%27s_Polo_Team?oldid=3683565"
Community content is available under CC-BY-SA unless otherwise noted.