Mickey's Racing Adventure is a Disney racing game for the Game Boy Color, created by Rareware and published by Disney Interactive and Nintendo.

The main point of the game is to win races in order to get back the stuff that Pete stole. Along the way, upgrades may be purchased as well as hints and bonus games. The Post Office and Print Shop in Mickey's Hometown are unlocked by trading nuts and paying Disney Dollars to Chip and Dale in order to get the keys to the places.

Although Pluto cannot race, he is essential to completing the game. Pluto is tasked with the job of finding six Golden Bones needed to get past Butch for the final race. They are found in their own minigames, all of which must be cleared to find them all. Five of the bones are found in each of the racing areas that the other characters partake in, which can be accessed in a parcel sent from the Post Office after beating Pete in the racing area in question, and the sixth is located in the overworld. In each of these levels, Pluto digs through an underground area, where he must either collect bones or defeat robot versions of Butch (or both, in rare cases).

Magica in her magic shop

Ludwig von Drake inside his lab

Pete after being defeated in Mickey's boss level

Clarabell serves as the ticket vendor

Pete after being defeated in Minnie's boss level 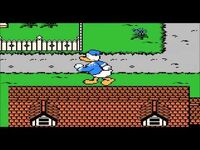 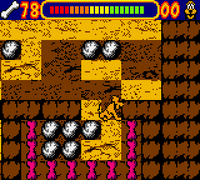 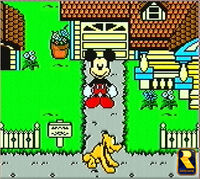 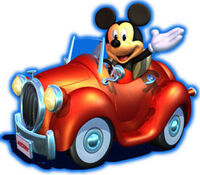 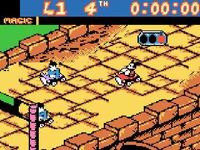 Add a photo to this gallery
Retrieved from "https://disney.fandom.com/wiki/Mickey%27s_Racing_Adventure?oldid=3597242"
Community content is available under CC-BY-SA unless otherwise noted.