Dream Along with Mickey
Mickey's Royal Friendship Faire is a daily castle stage show performed in front of Cinderella Castle at the Magic Kingdom park in Walt Disney World. The show stars Mickey and other classic Disney characters, as they celebrate the worlds and stories of some of the recent Disney animated classics, including The Princess and the Frog, Tangled, and Frozen.[2]

As of 2021, this show is no longer in operation due to the ongoing COVID-19 pandemic.

Mickey and his troupe of Merry Makers have been preparing to host a joyous festival and have ventured far and wide to invite friends from other lands to join their celebration.

From New Orleans, Goofy has invited Tiana, Naveen, and Louis (later version) to add a little spice of New Orleans jazz to the party ("Down in New Orleans", "When We're Human", "Dig a Little Deeper"). From Corona, Donald brings Pub Thugs from The Snuggly Duckling, and Daisy introduces us to her special guests, Rapunzel and Flynn Rider (instrumental of "When Will My Life Begin", "I've Got a Dream").

Finally, Mickey shares a surprise with Minnie, as he has traveled to Arendelle to invite Olaf, Anna and Elsa, who contributes a blast of her icy magic ("In Summer", "Let It Go").

It all culminates in a grand dance ("With a Smile and a Song"), as the Merry Makers invite all their special guests to join in the fun on this special day in Magic Kingdom Park.

Starting on September 2, 2016, during Mickey's Not-So-Scary Halloween Party, the ending of the show was revamped with new costumes and a finale song celebrating the autumn season, which replaces "With a Smile and a Song".

By November, it had a Christmas finale with a few Christmas songs prior to the the dance.

Concept art featuring The Princess and the Frog. 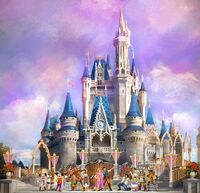