Mickey's Safari in Letterland is a 1993 educational Nintendo Entertainment System video game starring the famous cartoon character Mickey Mouse. In this game, Mickey must collect all of the letters of the alphabet for his museum by going to six different territories (including places inspired by the Yukon and the Caribbean). There are three levels of difficulty.

Enemies in the game include snakes, porcupines and alligators. However, players cannot die from these enemies - they are simply bounced of them. Using a digitized audio sample of each of the letter, Mickey spells with letters using his own voice.

The game is intended for preschoolers and toddlers. Basic literacy skills are taught in this side-scrolling video game. 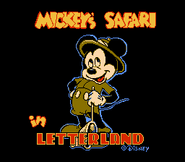 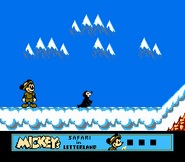 Gameplay
Add a photo to this gallery
Retrieved from "https://disney.fandom.com/wiki/Mickey%27s_Safari_in_Letterland?oldid=3663949"
Community content is available under CC-BY-SA unless otherwise noted.