As the title suggests, Mickey's WaterWorks is a splashy parade created to refresh and bring watery fun to guests from all walks of life. The parade showcases how Mickey Mouse and more than 30 other Disney characters keep Hong Kong Disneyland's landscape looking so beautiful and lush. However, guests viewing the parade must be aware that water is everywhere on the route, except for the Dry Areas of the route located by signs along the route.

Favorite Disney characters, some of whom had never appeared at Hong Kong Disneyland before such as the Big Bad Wolf and Pinocchio, prior to the debut of this parade, entertain guests with a water-filled extravaganza of music, dance and a host of colorful themed floats together with over 100 performers (including said 30 characters) set to an original score.

Concept Art for The White Rabbit's Watering Can 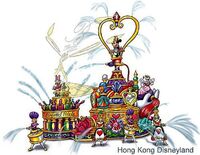 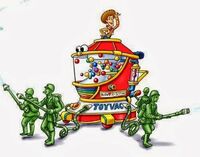 Canceled Monstro Car (shown only on the office website)

Concept Art for a Canceled A Bug's Life Unit 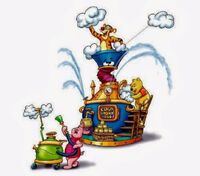 Concept Art for a Canceled Winnie the Pooh Unit