Mickey's Speedway USA includes a Grand Prix mode, as well as multiplayer racing and battle modes. The game features six initial characters, with a further four being unlockable. The default characters are paired in likeness, and each pair is given the same statistics, such as Donald and Mickey having average statistics, or Pete and Goofy having a concentration in speed.

Mickey Mouse's dog, Pluto, is kidnapped by the Weasels for his "diamond" collar (later found out to be fake). As one of the drivers, including Disney characters such as Mickey, Minnie, Donald, Daisy, Goofy and Pete, the player races on tracks in the United States, based on locations such as New York, Alaska, Los Angeles and Seattle, to find the Weasels and save Pluto.

These characters are available at the start of the game.

These characters have to be unlocked before being used.

The game's only award (as evident in volume 144 of Nintendo Power) is a Nintendo Power Award for 2000's Best Video Game based on a Cartoon, with Scooby-Doo! Classic Creep Capers and Tom and Jerry in Fists of Furry as the two runner-ups.

Goofy racing along in first place

Back cover for N64 version 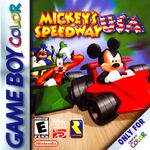