Mickey Mania: The Timeless Adventures of Mickey Mouse is a 1994 platformer video game developed by Traveller's Tales and published by Sony Imagesoft for Sega Mega Drive/Genesis, Sega CD, and Super NES. In the game, the player controls Mickey Mouse, who must navigate through various side-scrolling levels, each designed and based on classic Mickey Mouse cartoons from 1928 to 1990. The game was later released on PlayStation in Europe and Australia as Mickey's Wild Adventure and was later released internationally on the PlayStation Store on July 10, 2012. The box stated that Mickey Mania was the first video game to feature animations by real Disney animators. This is also known as the first game that video game designer David Jaffe worked on.

Mickey Mania is a platformer in which players control Mickey Mouse as he visits various locations based on his past cartoons, ranging from his debut in Steamboat Willie to the more recent The Prince and the Pauper. Mickey can attack enemies by either jumping on them or by using a limited supply of marbles, which are collected throughout the level. Mickey can take up to five hits, represented by the fingers he holds upon his hand, which can be replenished by collecting stars, whilst extra lives can be gained by finding Mickey hats. Levels offer a variety of challenges such as puzzles the player must solve, escaping from a rampaging moose and fleeing from a flaming staircase.

The levels in the game are based from the following classic Disney Mickey Mouse cartoons:

Originally, Mickey Mania was planned as a game to be released as part of Mickey's 65th birthday. However, as that would have only allowed for six months to develop the game, this idea was soon scrapped in favor of the more compelling concept of Mickey traveling back in time to his original classic cartoons and subsequently recreating the events of the aforementioned shorts in the process. The game pays tribute to Mickey's whole cartoon career (released in 1994, the year after Mickey's 65th birthday).

The four versions of the game differ greatly from each other. The Super NES version is missing the hidden Band Concert level and the staircase sequence in the Mad Doctor level, as well as a few special effects and some of Pluto's appearances and some ending-level sequences. It also adds loading time screens in between each area. In contrast, the Mega-CD and PlayStation versions add a sequence near the end of the Prince and the Pauper level wherein Mickey must find pencils to call upon the other Mickeys from the six main levels to attack Pete, as well as giving Mickey an extensive dialogue relevant to situations throughout the game. The Mega Drive/Genesis lacks the hidden area near the end of the first level. The PlayStation version, meanwhile, enhances the graphics (all sprites are remade, notably the staircase sequences are rendered in 3D graphics and the one in the Mad Doctor level, crates occasionally come from behind which Mickey has to dodge) and adds a sequence at the end of the Mickey and the Beanstalk level where Mickey must run away from Willie the Giant (Willie makes no appearance in any of the other game versions despite being mentioned in the manuals of all four versions). On the contrary, the difficulty level is increased and badly balanced in respect of the Mega Drive/Genesis, Mega-CD/Sega CD, and SNES versions.

Mickey Mania was very well received with critics, with many praising its impressive graphics and solid gameplay. On release, Famicom Tsūshin scored the Super Famicom version of the game a 28 out of 40, giving the Mega Drive version a 30 out of 40. Sega Magazine and Mean Machines Sega gave the Sega Mega Drive version an 87 out of 100.

According to Traveler's Tales founder, Jon Burton, a sequel to Mickey Mania started development after the original game's success. However, the sequel was canceled in favor of the development of the Toy Story video game given the release of the film at the end of 1995. Jon Burton has revealed on his YouTube channel "GameHut" a prototype of the game, showcasing a level based on 1934 short "Two-Gun Mickey". This is the only short known to have been considered as a level for the sequel. Some assets intended for the game, like water and fire effects, were still present in early prototypes of the Toy Story video game.

Back cover for Sega Genesis version

Back cover for Sega CD version

Back cover for SNES version 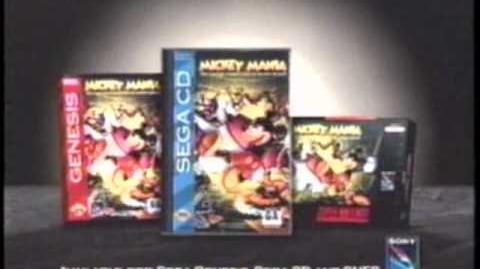 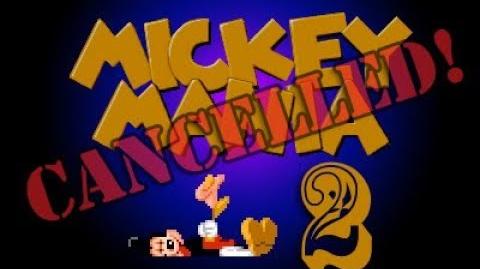