Mickey Mouse: Magic Wands! is a puzzle/action game hybrid developed and published by Kemco in Japan on December 22, 1993, while it was later published in North America by Nintendo in May 1998. It is the sixth game in Kemco's Mickey Mouse-based video games on their Crazy Castle series and the only title to be released in North America under its original title. The North American version features Super Game Boy support.

One day, Mickey and his friends went for a walk in a forest. They became so distracted by all the natural beauty surrounding them, they got lost. Pretty soon, they discovered a haunted castle. "That's the witch Yashja's castle," they told each other. "Once you enter, you can never escape! The castle is full of tricks and traps and even magic wands to create ice and fire. Let's not get any closer!"

All this chatter aroused Yashja from her slumber. "So! Who dares disturb my sleep?" she yelled. "You all shall pay!" Suddenly, a gaping hole opened up under Mickey's friends and they all fell in. Now Mickey has to save his friends, who are now being held captive by the witch!

To save his friends, Mickey has to collect puzzle pieces that completes images of his Disney friends, including Minnie Mouse, Donald Duck, Goofy and even obscure characters like Grandma Duck from the comic book series. To do this, Mickey has to wave his wand over crystals which conceal not only pieces of the image, but also items and even an occasional enemy. Each big level has ten small stages, each with at least one image to complete. Each tenth stage has an end boss to defeat. Also, the image to complete in the tenth stage of each level reveals the Disney character being held captive by the end boss of that level.

In the ending, after the scenes play out, the staff was never credited, so it is currently unknown who worked on this game. In any case, here's how said scenes play out:

Mickey runs to the center of a long room and calls out for Minnie, who eventually answers. They meet and embrace each other. Then they go meet their Disney friends. Everyone says it's good they could return. Minnie thanks Mickey for saving her and the rest of their friends. Goofy then decides to take a picture of all the friends. After the picture snaps, the Disney characters are seen together in a big portrait. Then it fades to the words THE END.

The game opens with Mickey and friends happening upon the castle

Mickey is starting to form a picture of Minnie Mouse 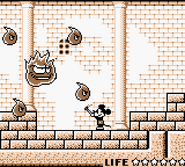 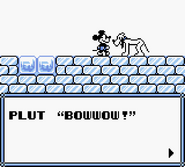 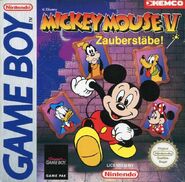 Cover from a German release of the game
Add a photo to this gallery
Retrieved from "https://disney.fandom.com/wiki/Mickey_Mouse:_Magic_Wands!?oldid=3778063"
Community content is available under CC-BY-SA unless otherwise noted.