“Join us now in a presentation of the latest colossal in Mickey's illustrious career. Mickey Mouse, bigger and better than ever, appears in a completely new dimension, leading his friends in a medley of Walt Disney musical highlights.”
―Pre-show film narrator

Mickey Mouse Revue was an Audio-Animatronic musical show featuring Mickey Mouse as the conductor of an orchestra, with the orchestra members represented by various characters from several Disney animated films.

Characters and their Instruments in the Orchestra

Songs and their Performers on stage

Guests entered the attraction through a lobby painted in hues of rose and pink. The walls were lined with trompe l'oeil paintings of Mickey (and one with Minnie) in costumes from several of his more famous roles, from Steamboat Willie to The Sorcerer's Apprentice. Guests waited here before a host or hostess signaled that it was time to enter the pre-show theater. At that time, they were ushered through a small portal and into a room lined with several tiers of viewing platforms separated by lean rails.

The pre-show was an eight-minute film that traced Mickey's career and the use of sound in his films. The first portion of the film was narrated by an animated soundtrack that wiggled and jumped its way across the screen in time with the sounds it was making (an effect similar to one used in The Three Caballeros, where Donald Duck gets mixed up in the soundtrack of a crazy Latin song.) At the end of the pre-show film, the focus was shifted to Mickey's role as the host of the Disney theme parks. The final scene was live-action footage of Disney costumed characters pouring out from the front of Sleeping Beauty Castle and dancing to a jazzed-up version of the Mickey Mouse March. Mickey came to the front of the scene and urged the guests to follow him into the main show theater as he said "Come along folks, it's time for the Mickey Mouse Musical Revue!".

The guests entered the main show theater through one of several pink automatic doors on the opposite side of the pre-show theater. The cavernous main show theater contained 13 rows of seats facing an 86-foot long stage. The proscenium was draped with a huge red curtain and flanked by two smaller stages resembling box seats. In the center of the curtain were Mickey versions of the traditional theatrical comedy and tragedy masks. Once everyone was seated, a host or hostess reminded everyone not to eat, drink, smoke or take flash pictures during the show.

The room grew dark and the sound of an unseen orchestra tuning their instruments filled the room while the curtains opened. In the center of the stage, Mickey rose from a pit and into view on a bright red pedestal, with the orchestra soon rising around him.

Spread out across 35 feet of the stage area, the orchestra was comprised of 23 different characters. The orchestra played a medley of familiar Disney tunes, starting with "Heigh-Ho", then moving onto "Whistle While You Work", "When You Wish Upon a Star" and "Hi-Diddle-Dee-Dee".

At the conclusion of the overture, Dumbo's tuba intoned the first few notes of "Who's Afraid of the Big Bad Wolf?" as the wolf's shadow snuck across the rear curtain towards center stage. Further right, a section of the curtain rose to reveal the Three Little Pigs in a cross-section of Practical Pig's brick house. The pigs played and sang a few seconds of their signature song before the curtain closed on them and another section lifted to the left.

The next vignette featured Snow White and her forest animal friends sitting on a wooded hillside. She sang a version of "I'm Wishing". As Snow White finished, an adjacent area of the hillside came into view from behind another section of rising curtain. Here, the Seven Dwarfs stood in their cottage, playing "The Silly Song". The dwarfs sang part of the song with Snow White's help before the curtains lowered on their settings.

To the far right end of the stage, the curtain rose on Alice and the Flowers, who swayed in time as they sang part of "All in the Golden Afternoon".

The next number was "The Three Caballeros", the show's most animated and comical segment. Gunshots were heard as the flying serape rose from the pit to the left of the orchestra. On the serape were Donald Duck, Panchito, and José Carioca. They sang their theme song in a blaze of music and color. Each shot fired from Panchito's pistols sent sparks of bright light streaking across the room. The three had barely begun their song when the lights went out on the serape. Instantaneously, Panchito and José appeared (still singing) on the small side stage to the audience's right. Then Panchito fired his pistols again and the glow of the bullet raced across the stage, illuminating Donald on the left side stage. Donald shook his maracas vigorously and continued the song. With the sound of another ricocheting bullet, he disappeared and reappeared on the right side stage. Another shot and Panchito and José popped up where Donald had been just seconds prior. The three were soon reunited on the serape in time to finish their song and disappear as quickly as they arrived.

To the far left end of the stage, the curtain rose on the Fairy Godmother and Cinderella, who was dressed in her scullery maid outfit. The Fairy Godmother sang "Bibbidi-Bobbidi-Boo" and waved her magic wand around. Soon, in a shower of twinkling lights, Cinderella was transformed into her princess incarnation. The curtain closed on them as a projection of Cinderella and Prince Charming, as silhouettes, danced across it in a spotlight, singing "So This is Love" as they waltzed with clusters of hearts framing them on the curtain.

When the projection faded out, Brer Fox, Brer Rabbit, and Brer Bear rose into view from the pit to the right of the orchestra, kicking off the show's finale by singing "Zip-a-Dee-Doo-Dah". As they sang, the orchestra rose beside them, followed by the Three Caballeros reappearing and the rear curtain rising to reveal all of the show's scenes and characters at once. The houses of the Three Little Pigs and Seven Dwarfs were gone, leaving all of the characters contrasted against a brightening sky in the background. Cinderella now stood with Prince Charming and everyone joined in the song. A rainbow gleamed across the horizon as the characters' voices and instruments all reached a crescendo.

Next, the entire stage fell dark, save for a spotlight on Mickey. His pedestal spun to face the audience as the other characters sang the "Mickey Mouse Club Alma Mater". After all the other characters disappeared, Mickey, all choked up, said "Thank you, folks. That concludes our show. We hope you enjoyed it". Then, as he let out a little mouse laugh, he took a bow as the main curtain closed. 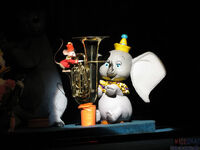 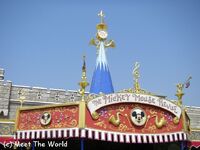 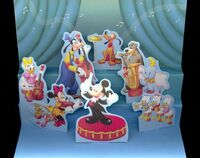 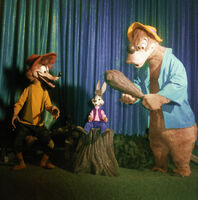 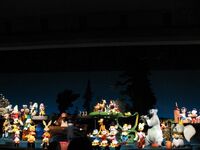 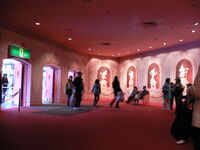