November 14, 2006 (DVD)
December 16, 2006 (TV)
"Mickey Saves Santa" is the twentieth episode of the first season of Mickey Mouse Clubhouse, and also the series' Christmas episode. It was originally released directly-to-video on the DVD Mickey Mouse Clubhouse: Mickey Saves Santa and Other Mouseketales on November 14, 2006, and later aired on Playhouse Disney on December 16th of the same year.

Mickey and Donald dash off to rescue Santa Claus so he can deliver everyone's presents.

The title card of the episode 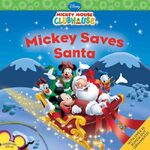