Mickey and Minnie's Runaway Railway is a dark ride at Disney's Hollywood Studios at Walt Disney World Resort, replacing The Great Movie Ride, and soon to open in Mickey's Toontown at Disneyland. The ride features an original story, themed after the Disney Channel animated series Mickey Mouse, making it the first Mickey-themed ride-through attraction to open in the Disney parks' history.[1]

Construction began on August 13, 2017, and the ride was planned to open in 2019, as part of the park's 30th anniversary celebration, but it eventually got delayed to March 4, 2020. The Disneyland version was announced on April 19, 2019 and is originally set for a 2022 opening in Mickey's Toontown.[2] However, it was delayed to 2023, since the opening was postponed indefinitely following the closure of the park due to COVID-19 pandemic.[3] [4]

Starting on February 6, 2020, guests were able to make early Disney's Fastpass reservations for the ride.[5]

The ride was announced at the 2017 D23 Expo in Anaheim, California, and was described as featuring "2 1/2 D" technology (no glasses required). Disney Imagineer Kevin Rafferty stated: "This is one of the boldest...most impossible things I’ve ever worked on in almost 40 years of being an Imagineer. And you know what? That’s what I love about it. Well, that, and Mickey," [...] “This is not going to be a small attraction, it’s going to be game-changing.”[1]

Furthermore, the Disney Television Animation team responsible for the Paul Rudish helmed Mickey Mouse shorts collaborated with the Disney theme park division and its Imagineers to bring the attraction to life.[1] Sound design for the attraction utilized the original sound effects machines constructed by Jimmy MacDonald and other sound producers during the early years of Disney animation. The whistles used for the steamwhistle in Steamboat Willie were used to create the whistling sounds of the train.

The premise of the ride is that guests are invited inside the theater to watch the premiere of a brand new Mickey Mouse cartoon, Perfect Picnic.

In the upcoming Disneyland version, a new building will be constructed for the ride in Mickey's Toontown called the El CapiTOON Theater, which is a pun on the El Capitan Theatre in Hollywood, which in turn is owned by Disney. The queue for this version will feature a special exhibit put together by the fictional Toontown Hysterical Society, showcasing costumes and props from the toon world.

The guests then enter the auditorium where the short, Perfect Picnic will be premiering. Once the doors close, the cartoon begins on the movie screen. The short begins with Mickey, Minnie, and Pluto set out for a picnic at the Runamuck Park, singing "Nothing Can Stop Us Now" while packing Mickey's car for a picnic. Minnie accidentally packs Pluto and the picnic basket in the trunk. The duo make their way to the park. Along the way, Mickey and Minnie drive by Goofy, who is operating the Runamuck Railroad train that travels around the park. Mickey and Minnie pull forward and hit a bump on a railroad crossing. The trunk pops open, releasing Pluto and the picnic basket into the air, which Pluto quickly manages to save the picnic basket. However, a pie from the basket, falls out and lands on top of the train’s smokestack. With the pie clogging the smokestack, the train picks up speed. Goofy panics as the train pulls into a railroad barn. An explosion occurs, ripping a large hole in the movie screen, literally breaking the fourth wall. When the smoke clears, Goofy lands on a loose board on the outside of the barn. Seeing the guests, Goofy offers them to take a ride on the train. He then asks a nearby cast member help the guests step inside the cartoon while he goes back to the barn to fix the train. Upon walking through the movie screen, the guests find themselves inside the cartoon railroad station, and they make their way to the loading platform where the train arrives.

Once the train stops at the loading platform, guests board one of four cars behind the locomotive. The train then departs the station, traveling on a tranquil sunny day in the park with a cheery song and a chirping bird named Chuuby, while Mickey and Minnie are driving around in the distance. The train makes a left turn entering the tunnel. Once inside the tunnel, Goofy opens the back window and asks the guests if they are ready for a tour around the park. Mickey and Minnie in their car pull up next to Goofy and exchange greetings. Mickey parks next to a railroad switch and asks Goofy to take care of the guests. Goofy proudly exclaims, "Gawrsh, they're with me, what could possibly go wrong? Well, Back to work." Right after Goofy closes his window and begins to sing "I've Been Working on the Railroad", the switch falls, causing the train to separate with Goofy's engine making a left turn while the cars with the guests heading to the right. As the train then derails, Mickey and Minnie set off to catch the train and save the day.

The train exits the tunnel into the desert where Mickey and Minnie ride on horseback, trying to round up the cars, but they caught on themselves and as the vultures target them. The train then enters a Carnival featuring Donald Duck running a hot dog stand, Horace Horsecollar running a popcorn booth, Huey, Dewey and Louie among the guests looking for a good time, and Pluto still carrying the picnic basket while looking for Mickey and Minnie. The duo come floating in on balloons to try and help the train. But before they can get down, the Twister logo on the side of the carnival's wooden roller coaster comes to life and sweeps up the carnival in a storm. Guests are given a close-up look at the trio swirling around among other objects. The tornado then carries the train, Mickey, Minnie and Pluto to a tropical island where a volcanic eruption occurs. The eruption sends the train down a river and over a waterfall. After going over the falls, the train ends up underwater, where it passes a submarine and musical sea life, including a Giant Squid that plays a trumpet.

The guests find themselves sucked into a sewer pipe and emerge into a Big City. The guests see Pete working on road construction with a jackhammer powerful enough to shake the neighboring buildings (and laughing when he sees what happens), while Donald can be seen again in a truck stuck in the traffic jam the train has caused (honking his horn impatiently as he does so). The guests then enter a dance studio owned by Daisy Duck, who instructs the train cars in dancing a waltz before establishing a conga line out. The dancing train cars exit out through an alley and enter a dangerous factory. Mickey and Minnie try to stop the cars from being smashed by "The Smasher" on a conveyor belt. Mickey and Minnie successfully pull the switch which shuts the factory down and magically transforms the scenery to that of the park at night. Reversing, the train then rejoins Goofy's engine.

As the guests pass through a tunnel, Goofy concludes the tour and hopes that the guests had a good time. The train pulls around the corner to find Mickey, Minnie and Pluto having a picnic singing one final rendition of "Nothing Can Stop Us Now" while fireworks go off in the sky above and over the guests. Goofy waves goodbye to the guests and closes the back window. Just before the train enters the station, Goofy finds a lever and pulls it, causing an electric jolt through the train following his signature holler making guests enjoy it as a last laugh. The train then pulls back into the barn, where Goofy thanks the guests for riding with him and tells them to exit safely and asks for them to come back soon. As guests leave the station, they pass through the movie screen to return to the real world, the title card saying “The End” is displayed as guests leave the theater. 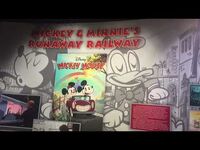 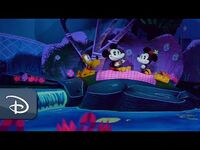 Another poster with an opening date reveal 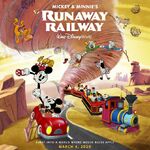