Mickey and the Beanstalk

Mickey and the Beanstalk

English
Mickey and the Beanstalk is a Mickey Mouse cartoon originally released in 1947 as the second half of Fun and Fancy Free.

This segment is an adaptation of the fairytale Jack and the Beanstalk by Benjamin Tabart, with Mickey Mouse, Donald Duck, and Goofy as peasants who discovered temperamental Willie's castle in the sky through the use of some magic beans.

Mickey and the Beanstalk was narrated by Edgar Bergen in live-action sequences, who, with the help of his ventriloquist's dummies Charlie McCarthy and Mortimer Snerd, told the tale to child actress Luana Patten at her small birthday party.

Mickey, Donald, and Goofy live in a place called Happy Valley, which was plagued by a severe drought after a Golden Harp who sang to make people happy was stolen from a nearby castle in Happy Valley. The residents had nothing to eat except one loaf of bread; in a memorable scene, the bread is cut into paper-thin slices. Donald, who is driven to the verge of insanity by starvation, then goes into a rage, complaining that he can't stand it anymore. He then makes a sandwich out of plates and silverware and tries to eat it, but Mickey and Goofy stop him and manage to calm him down. He then sees an axe, which he attempts to use to kill their cow for beef, but they stop him again and Mickey decides to trade the cow for money to buy food. Goofy and Donald are excited that they'll be able to eat until Mickey returns and reveals he traded in their beloved bovine for magic beans. Thinking that Mickey got tricked, Donald furiously throws the beans and they fall through a hole in the floor.

However, it turns out the beans were magic, as later that night with the light of the full moon, a beanstalk sprouted, and it carried their house upward as it grew all through the night. The next morning, climbing the gigantic beanstalk, they cross a moat in a pea pod, they are attacked by dragon flies and the trio tries to defend themselves then a dragonfly comes their way but is eaten by a big fish which makes a big splash causing the moat to dry up leaving the moat with just sand, they climb the castle steps and they knock, the castle seems tobe deserted, they enter a magical kingdom of equal scope, and entering the castle, Mickey, Donald, and Goofy help themselves to a sumptuous feast. This rouses the ire of Willie the Giant, who is able to transform himself into anything. When they are spotted by Willie, Mickey spots a fly swatter and asks Willie to demonstrate his powers by turning into a fly. Willie initially suggests turning into a pink bunny, but when he agrees to their request, he turns into a pink bunny anyway, and spots Mickey, Donald, and Goofy with the fly swatter. Disappointed, Willie captures Mickey, Donald, and Goofy and locks them in a box. Mickey, however, escapes. It was up to Mickey to find the key and rescue them, with the help of the singing Golden Harp. Once freed, the hapless heroes kill the giant by chopping down the beanstalk and return the Golden Harp to her rightful place and Happy Valley to its former glory.

There have been several alternate versions of Mickey and the Beanstalk, each with a different narrator.

The first alternate narration was that of Sterling Holloway, which originally aired on a 1955 episode of Walt Disney's anthology TV series, replacing Edgar Bergen's scenes and narration. As such, the ending scene was altered: the scene with Willie, alive and well after falling off the beanstalk, lifting up the roof to ask the occupants inside where Mickey is was retained, but this time, he lifts up the roof not of Bergen's house, but of the Disney Studios, to ask Walt Disney this question. This particular episode later reaired as part of the "Disney's Wonderful World" season during 1979-1981, but without the interaction at the end between Walt and Willie, which can currently be viewed at the Paley Center for Media. During the 1980s, this version was often accompanied with (and preceded) Dumbo on TV airings of said movie. It also aired as episode #76 of the TV show, Good Morning, Mickey!.

The second and most common alternate version aired on a 1963 episode hosted by Ludwig von Drake and his companion Herman the Bootle Beetle. Additionally, this version has been used for all home video releases of the standalone cartoon (with an 8-second opening title and ending credits added).

A third version of Mickey and the Beanstalk was hosted and narrated by Shari Lewis and Lamb Chop in a 1973 episode of The Mouse Factory. A portion of Beanstalk was also narrated by Lynsey McLeod as Belle in the episode "Problem Solving: Ingenuity" from Sing Me a Story with Belle.

Interestingly, for both the Ludwig Von Drake and Shari Lewis/Lamb Chop versions, the segments and narration follow a bit more closely to the 1947 film version (albeit with Ludwig Von Drake or Lamb Chop replacing the sassy comments of Charlie McCarthy). Also, like Fun and Fancy Free, the Von Drake and Lamb Chop versions end with the narrator (be it Ludwig Von Drake or Shari Lewis) finishing his/her story and comforting his/her companion (be it Herman or Lamb Chop), who was crying for the assumed death of Willie. Just as the narrator says that Willie is a fictional character and not real, Willie himself appears, alive and well, tearing the roof off the narrator's house. Willie inquires about Mickey's whereabouts, but the narrator faints in shock, while the companion bids Willie goodnight. However, the only difference is that the Ludwig Von Drake also closes with Willie stomping through Hollywood looking for Mickey (again, like Fun and Fancy Free), whereas the Shari Lewis version just ends with Lamb Chop talking to Willie. (Also, the Shari Lewis version has Willie's dialogue redubbed in that ending scene).

There was also another edited version of the short dubbed into German in 1966. This particular edit is based on the Ludwig Von Drake narration and uses the same edits of said version, except without any narration sequences (similar to the Sterling Holloway narration). Likewise, these additional changes occur:

This original German dub was released on home video during the 1980s, but ceased to exist when a re-dub was made to the entire Ludwig Von Drake version in 1993.

A similar edit of the 1966 German cut was used for international TV airings (or at least, the Czech Republic and Germany) and accompanied after The Prince and the Pauper. The Ludwig Von Drake version was used, although his narration is re-dubbed by Corey Burton, replacing Paul Frees. Like the 1966 German edit, there are no narration sequences, although this time, "My, What a Happy Day" is entirely cut, so the cartoon begins with the Harp getting stolen, after a brief introduction of Happy Valley.

A Mickey and the Beanstalk book, circa 1947 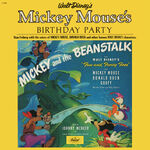 Mickey Mouse's big "NO!" right after Donald Duck grabs the axe to kill the cow.

Credits for the Portuguese European Dubbing