Mickey and the Wondrous Book is a live stage show that premiered in Storybook Theater at Hong Kong Disneyland on November 17, 2015, as part of its 10th-anniversary celebration.[1]

On June 23, 2015, David Lightbody, Director of Entertainment and Costuming at Hong Kong Disneyland Resort, says, "As the heart and soul of a theme park, Disney’s entertainment and shows have played an integral role in creating fond memories for guests at Hong Kong Disneyland in the past 10 years. We are committed to bringing more Disney stories to life and creating more excitement and appeal through a variety of new entertainment and shows for our guests for decades to come." To celebrate its 10th anniversary, the new stage show will be offering an all-new experience of Disney stories and it will broadcast on the 10th anniversary of the theme song "Happily Ever After".

The show will also premiere at Shanghai Disneyland under the title Mickey’s Storybook Adventure at the Walt Disney Grand Theatre on June 16, 2021, as part of its 5th-anniversary celebration but with slight differences.

This 28-minute musical show is set in a magical library, where the adventurous hero Mickey and his trusty sidekick Goofy (both with articulated heads) discover a magical book that can bring stories to life. When curious Mickey opens the book, the comical snowman Olaf (represented as a puppet) from Frozen falls out. While trying to get Olaf back inside, Mickey is magically drawn into the book. 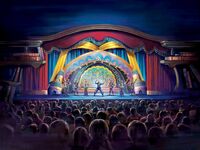 Retrieved from "https://disney.fandom.com/wiki/Mickey_and_the_Wondrous_Book?oldid=4562918"
Community content is available under CC-BY-SA unless otherwise noted.