The Middleton High School Cheerleaders are a main character group on Kim Possible.

For much of Kim Possible's time at Middleton High School, she was usually the captain of each cheerleading squad that she participated in. She was the captain of the Junior Varsity Cheerleading Squad in her Sophomore year, then she was the captain of the Varsity Cheerleading Squad in her Senior year. It was unclear which squad Kim was on during her Junior year. Bonnie Rockwaller was elected squad captain by popular vote at some point during Kim's Sophomore year, largely due to extensive efforts on her part to both improve the squad and replace Kim. However, Bonnie presumably returned the title to Kim after a very brief period upon realizing how heavy the workload was, as she was never referred to as captain after that point and Kim once again assumed a clear leadership role on the squad--Ron figured that Bonnie would only last about a month while Kim suggested two weeks at the most. It can be noted that Bonnie never again made a point of trying to replace Kim as captain again, although she did continue to angle for prominence during routines.

Ron Stoppable brought the school mascot, the Middleton Mad Dog, to life for his Sophomore and Junior years, which was not only well-received, but gained him some fame among the mascot circles. After joining the football team in his Senior year, he was forced to retire from his mascot duties. At Bonnie's suggestion, Jim and Tim Possible became new mascots, the Pep Puppies, during Kim and Ron's Senior year. 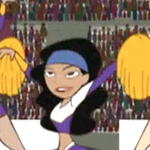 Unnamed blonde next to Tara.