Disney Wiki
Register
Don't have an account?
Sign In
Advertisement
in: The Mighty Ducks, Television series by Disney, The Disney Afternoon shows,
and 4 more

This article is about the animated television series. For the live-action film, see The Mighty Ducks.

Mighty Ducks is an American animated series that aired on ABC and The Disney Afternoon in the fall of 1996. The show was inspired by and very loosely based on the live-action films and NHL team of the same name. Twenty-six episodes were produced in total. The series most recently aired on Toon Disney but was removed from schedules in March 2007, and has not appeared on the channel's line-up since.

A direct-to-video feature film, Mighty Ducks the Movie: The First Face-Off, was released in 1997. It comprises three episodes of the animated series edited into one continuous movie: "The First Face-Off" Parts 1 and 2, and "Duck Hard".

DisneyQuest, an "Indoor Interactive Theme Park" located in the Downtown Disney area of the Walt Disney World, has an attraction loosely based on the program called Mighty Ducks Pinball Slam. Wildwing is the only character from the show featured, first as a life-size cutout at the front of the queue line and then again as the goalie in the game.

In this series, in another galaxy in another universe exists a planet populated entirely by humanoid ducks. Dubbed "Puckworld" by its inhabitants, it is a very cold, icy planet, perfectly suited to the Ducks' favorite pastime, ice hockey. For the citizens of Puckworld, hockey was not simply a sport, but a way of life, occupying virtually every aspect of day-to-day existence, from fashion to philosophy.

A very popular legend has it that centuries ago, during an invasion by a reptilian race called Saurians, a duck by the name of Drake DuCaine became the planet's savior over the Saurians' Overlords. The legend tells that DuCaine did so with a seemingly normal goalie mask that transforms into a high-tech mask. With it, DuCaine sent the Saurians to a mysterious dimension, known only as "Dimensional Limbo".

As it turns out, the legends ended up being true. The last of the Saurians escape Dimensional Limbo and return to Puckworld with an armada of robotic attack ships. The group of four is led by the last of the Saurian Overlords, Lord Dragaunus, who is assisted by the burly Siege, the shape-shifting Chameleon and the mystic Wraith. They invade the planet, enslaving the people of Puckworld so that they can produce more weapons to conquer the universe. However, a resistance was formed by Canard, a brave duck who found The Mask of Drake DuCaine in a tomb in the mountain called Twin Beaks. With it, the wearer of the Mask could see through the Saurians' invisibility cloak. Canard formed a band of Ducks to fight Dragaunus. The members of his team consists of Wildwing, Nosedive, Tanya, Duke, Mallory and Grin. They go on a mission to destroy Dragaunus's fortress the Master Tower and free the planet from the Saurians' control. While the mission is successful despite some setbacks, Dragaunus and his forces narrowly manage escape in their ship, the Raptor. The Saurians opened up a dimensional gateway and did the same thing that they did to escape Dimensional Limbo, attempt to escape through it. But Canard and the others followed him into the portal with the Aerowing, intent on capturing him and returning him to where he belongs and return home victoriously.

Dragaunus finds out that they're following him, attempts to get rid of the Ducks inside the portal by attacking them with an electromagnetic worm that will grow until it can swallow the Aerowing. In a desperate attempt to get rid of the worm, Canard sacrifices his own life by throwing himself to the worm. The plan succeeds, but at the price of Canard being trapped in Dimensional Limbo. (He was only seen in flashbacks and the episode "Take Me to your Leader", though the latter was Chameleon disguised as Canard to lure the ducks into a trap). Luckily, Canard gave the Mask and the leadership of the team to Wildwing Flashblade, his best friend. Both the Raptor and the Aerowing leave the portal and enter a different dimension, landing in the Earth city of Anaheim, California. The Ducks meet Phil Pomfeather, a human who becomes their manager and makes them a legitimate NHL team. Their arena, only known as The Pond in the show, has a hockey rink that doubles as a landing pad for the Aerowing above and has a formal HQ below. On Earth, the Ducks and Dragaunus continue their fight, although there are other villains that also challenge the six Ducks.

The Ducks and Saurians that landed on Earth are the only ones seen except in some flashbacks done by Grin when speaking of his past and one Lucretia DeCoy who was a traitoress to the race of the Ducks and a spy for the Saurians. 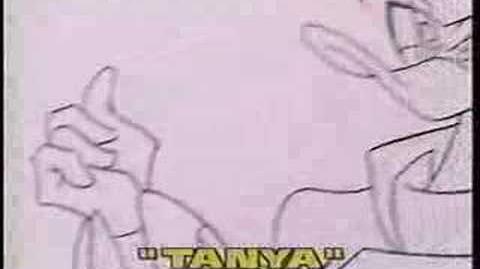 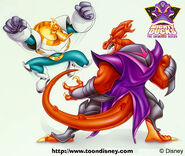