The Anaheim Ducks are a professional ice hockey team based in Anaheim, California, USA. They are members of the Pacific Division of the Western Conference of the National Hockey League (NHL). Since their inception, the Ducks have played their home games at the Honda Center.

The club was founded in 1993 by The Walt Disney Company as the Mighty Ducks of Anaheim, a name based on the 1992 film The Mighty Ducks. Disney sold the franchise in 2005 to Henry and Susan Samueli, who changed the name of the team to the Anaheim Ducks before the 2006–07 season. In their 18-year existence, the Ducks have made the playoffs eight times, winning three Pacific Division titles (2007, 2013, and 2014), two Western Conference Championships (2003 and 2007), and one Stanley Cup Championship (2007).

The logo that appeared on the shoulders of the 2003-2006 alternate jersey.
Add a photo to this gallery 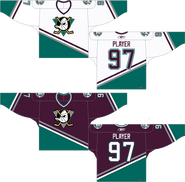 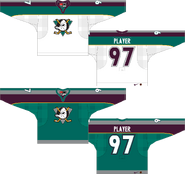 The original white jersey as it appeared in D2.
Add a photo to this gallery 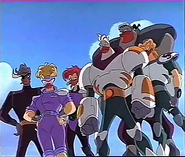 The animated duck version of the team in The Mighty Ducks Animated Series.
Add a photo to this gallery

Retrieved from "https://disney.fandom.com/wiki/Mighty_Ducks_of_Anaheim?oldid=3678106"
Community content is available under CC-BY-SA unless otherwise noted.