2
Michael Randall "Mike" Colter is an American actor, best known for his role as Lemond Bishop in the television series The Good Wife, and for voicing Agent Jameson Locke in the Halo franchise.

For Disney, he portrayed Luke Cage in the 2015 Marvel/Netflix series Jessica Jones, later reprising his role in 2016's series of the same name, and in 2017's The Defenders. He also portrayed Tommy Shine in the 2019 Fox film, Breakthrough. 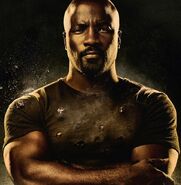 Tommy Shine
(Breakthrough)
Add a photo to this gallery

Mike Colter speaks at the Ringer panel at the 2011 Summer TCA Tour.

Mike Colter speaks at the CBS Segment at the 2019 Summer TCA Tour.
Add a photo to this gallery

Retrieved from "https://disney.fandom.com/wiki/Mike_Colter?oldid=4206939"
Community content is available under CC-BY-SA unless otherwise noted.