Miklos Mouse is a doppelgänger of Mickey Mouse who often tries to take Mickey's place, convincing others he is the real Mickey Mouse. He has also attempted to frame Mickey on several occasions.

He is deceptive and manipulative, taking advantage of looking like Mickey to take Mickey's house, friends, etc. Miklos is a master of disguise, and has even tricked Mickey Mouse himself into thinking Miklos was the real Mickey, while convincing Mickey he was the fake.

He is identical to Mickey Mouse in every way except one: he is grey instead of black. This has not stopped him from coloring his fur and fooling others into thinking him to be the real Mickey.

Miklos appeared in Mickey's Dangerous Double, in which Miklos planned on killing Mickey and stealing his life in order to retire from his crimes. He later returned in Mickey and the Grey Scourge where he teamed up with Pete, and then Mickey and the 7 Boglins where he colored Mickey red and convince Mickey that he was the fake, but was foiled when Minnie realized Miklos wasn't Mickey and tricked him into getting a tattoo. 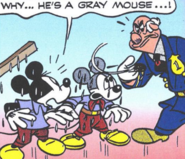 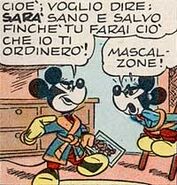 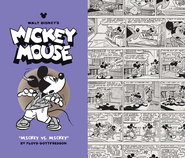 Retrieved from "https://disney.fandom.com/wiki/Miklos_the_Grey_Mouse?oldid=3335313"
Community content is available under CC-BY-SA unless otherwise noted.