Wyatt Isabelle Kutcher
Dimitri Portwood Kutcher
Milena Markovna "Mila" Kunis is a Ukranian-born American actress, who is best known for her role as Jackie Burkhart in the Fox sitcom That '70s Show from 1998 to 2006 and for voicing Meg Griffin in the Fox animated series Family Guy since 1999.

For Disney, she played Theodora the Wicked Witch of the West, in the 2013 Disney fantasy film, Oz the Great and Powerful which earned her the 2014 MTV Movie Award for Best Villain, Jill in Honey, We Shrunk Ourselves, and Abby Tournquist in Krippendorf's Tribe. She also was mentioned in the Dog With a Blog episode "Avery vs. Teacher".

Jill
(Honey, We Shrunk Ourselves) 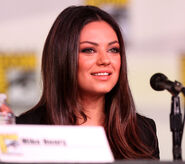 Mila Kunis at premiere of Oz: The Great and Powerful in February 2013.

Mila Kunis and Ashton Kutcher speak onstage at during the 2018 Breakthrough Prize ceremony. 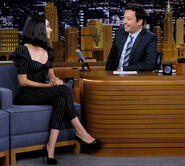