3-2-1-Blast off on a high speed galactic race with Miles Callisto and his robo-ostrich-best-friend, Merc, from the new Disney Junior series Miles from Tomorrowland! Journey with Miles on missions to the frozen exoplanet, Thurio, to unfreeze a frozen rover with your powerful heat ray as you dodge asteroids, collect rare space rocks, and turbo boost your way through this blastastic endless deep space race! 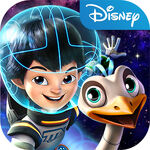 Add a photo to this gallery
Retrieved from "https://disney.fandom.com/wiki/Miles_from_Tomorrowland:_Missions?oldid=3016042"
Community content is available under CC-BY-SA unless otherwise noted.