Blue Jeans (horse)
Luann (pig)
Miley Ray Stewart is the lead protagonist of the former Disney Channel series Hannah Montana, portrayed by Miley Cyrus. Throughout the entire four seasons, she is portrayed by the same person. Miley is a farm girl from Tennessee who moved to Malibu, California to live her dream. She has a secret identity, Hannah Montana, who helps Miley accomplish being a sensational pop star while still having a normal life, although sometimes she wishes she could be one alter ego all the time.

Miley was born in Nashville (in real life, Franklin), Tennessee on November 23, 1992. She lived with her brother, Jackson Stewart, her father (former country musician and Hannah's manager), Robby Ray Stewart, and her mother, Susan Stewart, who has been dead before the show due to unknown reasons. On December 25, 2000, Miley got a guitar for Christmas, shown in the episode "I Am Hannah, Hear Me Croak". As a farm girl, she has a handful of pets, such as her horse Blue Jeans, and a pet pig named Luann, to name a few, but most of her animals and family are away in Nashville. She won the 1999 County Fair Pie Eating Contest for eating five raspberry pies in 10 minutes. She then threw up on the governor and always hated raspberries after that.

Miley and her parents, and her brother Jackson moved to Los Angeles, California before her mother died, in about fifth grade and attended Seaview Elementary, Middle, and High School, and they bought a Malibu beach house. She moved to live her dream, which is to be a popstar, although she is only famous while being Hannah Montana, her alter ego. She created her so that she can live her dream while being a normal teenager at the same time, while going to public school. She also created Hannah so that people won't like her just for being famous, and so that when she walks out on the streets, she will never get mobbed by fans or paparazzi.

In "I'll Always Remember You", she reveals her secret to the world for unknown reasons. The most important reason was so that she could get accepted at Sanford University to go with Lilly, which she did not because she had a lack of extracurricular activity. Her secret causes a bunch of chaos in the show. Although she is a pop music superstar, she will always be a "country girl at heart". In Miley Says Goodbye?, she has a dream about her horse, Blue Jeans that convinces her to move back to Tennessee. Instead, heartbroken to leave her friends and life in California, her father buys a big house, close to their old home in Malibu, where they have a ranch to keep Blue Jeans in. This house is a mixture of her life in Los Angeles and her life in Nashville, with the beach and a ranch. This house is more advanced, with an all new secret Hannah Montana closet, like the one she had in their old home. Lilly has lived with Miley's family since Season 3, when her mother got a job in Atlanta, and she stayed with them for the rest of the show, so that she wouldn't have to move to Atlanta or live with her father, who lives an hour away.

Miley is funny, stylish, compassionate, hyper, and sometimes negative when she gets caught. She is more into music than sports, except cheerleading and horseback riding. She is considered a girly-girl and southern belle or who loves to shop, and has a very determined, bold attitude. Miley often lies or goes through over-the-top scandals to get what she wants or make someone she loves happy, even when they tell her not to. However, in the end, she often makes the right decisions. Some examples include the episodes Would I Lie To You, Lilly? and I Want You To Want Me...To Go To Florida.

In order to keep her Hannah secret, Miley is forced to lie sometimes and even let loved ones down. Sometimes, the secret causes stress and drama, and is forced to tell her secret to some people, like Lilly or ex-boyfriend Jake. She doesn't like being embarrassed or hated, especially with people she likes. For example, in Ready, Set, Don't Drive, she tries getting her license, just so she can go to a cool party. Even though Miley often picks on her brother Jackson, she loves him and even admits it in some episodes. Some of her celebrity crushes are Jesse McCartney and the Jonas Brothers. Miley loves cheese and her most over-used pick-up line is, "Do you like cheese? I like cheese, will you go out with me?"

Miley has a several amount of family, but the only members that live near her in California are her, her father Robby Ray, and her brother Jackson. The rest live in Tennessee, where Miley spent for the first eleven years of her life. Her family is very southern. Miley's mother died when she was 10 and she misses her very much. At the beginning of the show, she would never even let her father date. Even though they are loving to each other, they do have their fights like in I Want You to Want Me... to Go to Florida, where she says "I hate you" to him for the first time in the series. Robby is very good at punishment towards his kids, like giving Jackson the silent treatment when he doesn't do his chores and ignoring Miley like she doesn't matter when she lied to him about her boyfriend. He is not good with relationships, in He Could Be the One when Miley told him she was having boy trouble, acting awkward. Miley and her father and brother joke around and tease each other all the time, and they try to act funny at the rough moments. Like every sibling relationship, Miley and Jackson fight a lot, but they do love each other, which is sometimes stated in episodes. They get so fed up with each other at one point when they had to share a bathroom that Robby made them dress up in macho outfits and fight. However they do nice things for each other and get along a lot. Everyone makes up at the end of the episodes, looking into the sweet moments in family.

NOTE: Miley probably has a lot more family members, but these are just the one's mentioned/revealed on the show.

It is revealed that Miley doesn't really have a lot of friends except for Lilly and Oliver, although she seems to know and talk to a lot of people. She does also have a lot of friends as Hannah. Lilly and Oliver have been friends since pre-K, which means that they always lived in Los Angeles. Even though they may have their fights, they will always be there for each other, and always have been since they were younger.

Jesse and Miley on a date

Miley breaks up with Jake for good 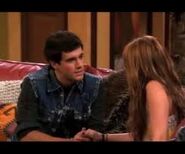 Miley listening to phone calls from Jesse and Jake

Miley with her mother