Has her memory of Agent P erased (movie)

"Again, forget the idea of little people in there."
Milly is a supporting deuteragonist of the animated TV series, Phineas and Ferb. She is one of the Fireside Girls in Danville and is a member of Troop 46231. She is voiced by Isabella Murad.

She, Isabella, Gretchen, and Adyson Sweetwater were the background singers for Phineas and the Ferb-Tones as the Ferbettes (“Flop Starz”, “Phineas and Ferb Musical Cliptastic Countdown”). She promoted the Brawl at the Mall by passing out fliers (“Raging Bully”). She, along with Ginger Hirano, Holly, and Katie, help Phineas and Ferb create S’winter (“S'Winter”). Another time, she and Adyson Sweetwater were trying to explain the T.V. concept to Isabella’s pet dog, Pinky (“Interview With a Platypus”).

Milly has curly brown hair, blue eyes with a twitch, freckles, and has a yellow bow (not always completely visible). Her uniform has a red collar, red circular pattern on the sleeves and the bottom, and black shoes, but when it's winter, she wears an orange sweater with a bell, leggings under her skirt, orange boots with white trim and a red Santa hat. She also appears to be somewhat plump, as she is the heaviest Fireside Girl.

Milly, Ginger, Katie, and Holly gearing up to help Phineas, and Ferb get ready for S'Winter

Milly and Katie ready for Isabella to come into the van

Milly laughing with Holly and Ginger 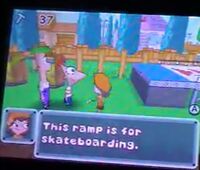 Milly as a baby

Milly in the air with her fellow scouts

Milly very close to the camera in mid-air 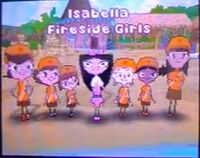 Milly with the other Fireside Girls in Ride Again 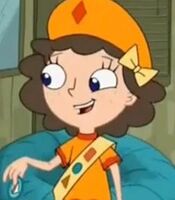 Milly with a patch for Gretchen

Milly next to Ginger

Milly staring off into space 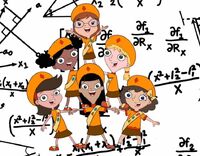 Milly in the pyramid singing
Add a photo to this gallery

Retrieved from "https://disney.fandom.com/wiki/Milly?oldid=3833160"
Community content is available under CC-BY-SA unless otherwise noted.