It's My World (And We're All Living in It)

October 3, 2016 – May 18, 2019
Milo Murphy's Law is a Disney Channel animated series that premiered on October 3, 2016, created by Phineas and Ferb creators Dan Povenmire and Jeff "Swampy" Marsh. The series is currently officially at an end. However, according to Povenmire a possible third season hinges on the amount of views it receives on Disney+.

“Milo Murphy’s Law” is an animated comedy-adventure series that follows 13-year-old Milo Murphy, the great-great-great-great grandson of the Murphy’s Law namesake. Milo is the personification of Murphy’s Law, where anything that can go wrong will go wrong; but he is prepared for every possibility, armed with knowledge, a backpack full of supplies and his fearless friends, Melissa Chase and Zack Underwood.

A B-plot follows Time Travelers, and best friends, Balthazar Cavendish and Vinnie Dakota. They were sent to the present to protect Pistachio's from becoming extinct by their boss Mr. Block, head of B.O.T.T. (Bureau of Time Travel). Cavendish and Dakota try there best to protect the green nuts, but after the two befriend Milo the plot's collide as Milo, Melissa, Zack, Cavendish, and Dakota try to prevent major disasters. Whether it's sentient blobs, mutant pistachio monsters, octopus aliens, or making Dr. Doofenshmirtz a part of their team; they will always face the problem together. 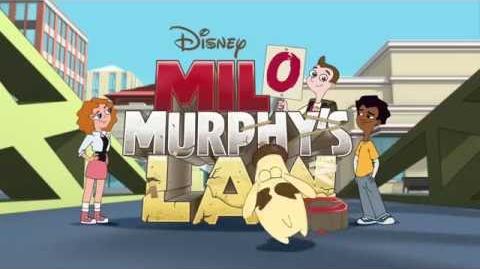 Artwork for a crossover with Phineas and Ferb