1995–present
Milo Anthony Ventimiglia is an American actor and voice actor. He is best known for his roles as Jess Mariano in the television series Gilmore Girls, Peter Petrelli in the NBC series Heroes, and Jack Pierson in This is Us.

For Disney, he voiced Spider-Man Noir in the Marvel animated series, Ultimate Spider-Man. He also played Loomis Crowley in Stay Alive and Denny Swift in The Art of Racing in the Rain. 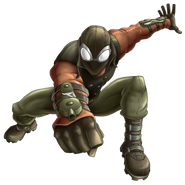 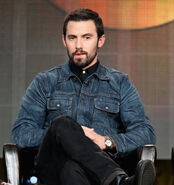 Milo Ventimiglia speaks at the The Whispers panel at the DIsney/ABC portion of the 2015 Winter TCA Tour.

Milo Ventimila attending the 25th annual Critics' Choice Awards in January 2020.
Add a photo to this gallery
Retrieved from "https://disney.fandom.com/wiki/Milo_Ventimiglia?oldid=4134386"
Community content is available under CC-BY-SA unless otherwise noted.