Graduates from Fresh Water High
Milo is a fish from the series Fish Hooks. He is labeled a "party guy." He is the brother of Oscar and best friends with Bea Goldfishburg.

Milo is Freshwater's wildest and craziest fish. He loves his best friends and would do ANYTHING for them, and that usually means chaos.

He is a cute 16-year-old fish who likes to have to have fun and party. If anything happens he will volunteer to help ("Bea Stays in the Picture"). And Milo will never let any of his friends leave their friendship ("Fish Sleepover Party"). He also seems to show that he has attention disabilities ("Fail Fish"). Milo once had to stay in a wheelchair because he rode down a waterfall in a barrel ("Doris Flores Gorgeous"). Milo likes doing various things like sticking his head in a water pipe and swimming down a waterfall ("Doris Flores Gorgeous"). Milo is also very lazy and always wears Oscar's underwear ("Dances with Wolf Fish"). It is also shown that there is another Milo which looks like him ("The Tale of Sir Oscar Fish"). Although he is rather mischievous and always laughs on others when they get pranked, he does not lie when he did or did not performed a prank ("Milo on the Lam"). He can also be very determined for certain things ("Flying Fish"). He describes himself as a guy that "Goes into dangerous adventures for no good reason" ("Peopleing").

Despite the fact that the two are brothers they're polar oppsites of each other causing fights at times. Usually their fights consist of Oscar being upset over something reckless that Milo did, or Milo being upset with Oscar's strictness. The two help each other out though and usually make up at the end of the episode showing that they really care for each other. It is unknown if Milo knows about his brother's crush on their friend Bea, although a photo near the end of the theme song suggests it, the show has not shown any hints that he knows.

Milo is one of Bea's two best friends the other being his brother Oscar. The two seem to be good friends that help each other out or help Oscar when he's having a problem; although whenever Milo does something very reckless she sides with Oscar in scolding him. It also seems like he may not spend much time with Bea by himself since during the episode "Big Fish" Milo made a huge deal out of the fact that Oscar was busy and couldn't hang out. Other times he may not acknowledge certain things that Bea does for him such as warn him throughout an entire episode about something or believe that Oscar was the one who said it ("Peopleing").

Milo sees Chief as a role model due to the fact that he's the only fish that has been outside the tank more times than himself. He doesn't seem to care or know who Milo is though but is willing to help Oscar and Bea save him ("Peopleing"). 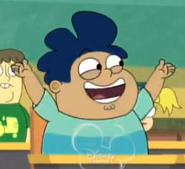 Milo as a human.
Add a photo to this gallery

Retrieved from "https://disney.fandom.com/wiki/Milo_the_Fish?oldid=3568188"
Community content is available under CC-BY-SA unless otherwise noted.