Milton Erwin "Milt" Kahl was an American animator for the Disney studio, and one of Disney's Nine Old Men.

Kahl is often considered the finest draughtsman of the Disney animators. He would often refine the characters sketches from Bill Peet with the ideas of Ken Anderson. For many years the final look for the characters in the Disney films were designed by Kahl, in his angular style inspired by Ronald Searle and Picasso. He is revered by contemporary masters of the form, such as James Baxter, Andreas Deja, and Brad Bird, who was his protégé at Disney in the 60's. In the behind-the-scenes feature "Fine Food and Film" shown on the Ratatouille DVD, Bird referred to Kahl as "tough", but in a gentle way, as he often gave Bird advice on where he could improve in animation whenever he came up short.

In the book, The Animator's Survival Kit the author Richard Williams makes repeated references and anecdotes relating to Kahl. The centenary of Kahl's birth is being honored by the Academy on April 27, 2009, with a tribute entitled "Milt Kahl: The Animation Michelangelo" and featuring Brad Bird as a panelist.

Note: At the time these films were produced, it was common for one animator to animate every character in the shot.

Bambi, Thumper, and Flower as adults

The King and The Grand Duke

Alice at the croquet party 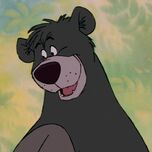 Milt Kahl caricatures himself with Robin Hood and a ventriloquist dummy resembling John Culhane, which ultimately would become Mr. Snoops in The Rescuers.