Katherine Kaling
Spencer Kaling
Vera Mindy Chokalingam, known professionally as Mindy Kaling is an American actress, voice actress, comedian, director, producer, author, and writer. She is best known for her television role as Kelly Kapoor on the American version of the mockumentary The Office from 2005 to 2013, and starred as Dr. Mindy Lahiri on the Fox sitcom The Mindy Project, which she also created, directed, and produced from 2012 to 2017. She has also written a memoir, Is Everyone Hanging Out Without Me? (And Other Concerns).

For Disney, she voiced Taffyta Muttonfudge in Wreck-It Ralph and Disgust in Disney/Pixar's Inside Out. She also appeared in the The Muppets episode "Single All the Way". In addition, she played Mrs. Who in A Wrinkle in Time and voices Val Little in Monsters at Work.

Mrs. Who
(A Wrinkle in Time) 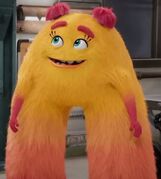 Mindy Kaling on set of The Mindy Project.

Mindy Kaling speaks at The Mindy Project panel at the 2012 Summer TCA Tour.

Mindy Kaling behind the scenes of Inside Out.

Mindy Kaling with Lewis Black, Bill Hader, Amy Poehler, and Phyllis Smith at the premiere of Inside Out.

Mindy Kaling visiting the The Late Show with Stephen Colbert in October 2016.

Mindy Kaling speaks at the Four Weddings and A Funeral panel at the 2019 Summer TCA Tour.
Русский
Community content is available under CC-BY-SA unless otherwise noted.
Advertisement